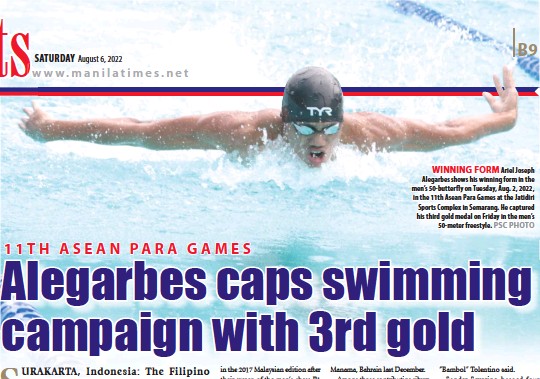 SURAKARTA, Indonesia: The Filipino swimmers sustained their winning drive Friday by adding three more golds, with rookie Ariel Joseph Alegarbes completing a sweep of his three events in another meet record in the 11th Asean Para Games at the Jatidiri Sports Complex in Semarang. Alegarbes took off like a torpedo in ruling the men’s 50-meter freestyle S14 race in 25.74 seconds in securing his third straight gold medal, duplicating the feat of female teammate Angel Otom last Thursday, in the stint supported by the Philippine Sports Commission. Fellow newcomer Marco Tinamisan sustained his sweet performance with his second straight gold medal, while Gary Bejino finally scored a breakthrough after two runner-up finishes in capturing his first gold in the swimming competition. Tinamisan bagged the gold in the men’s 100-meter freestyle S3 event in a winning time of 1:54.15, while Tokyo Paralympic veteran Bejino ruled the men’s 100-meter freestyle S6 race in 1:13.80 to raise the Philippine para swimming team’s gold total to 12. The Filipino para athletes, who surpassed their golden haul of 20 in the 2017 Malaysian edition after their sweep of the men’s chess P1 individual and team events last Thursday afternoon, hiked their output to 24 golds, 23 silvers and 43 bronzes with swimming’s latest contribution. The team already exceeded the previous tally of 20 golds, 20 silvers and 29 bronzes the country won in Kuala Lumpur five years ago. The Philippines and Malaysia are in a head-to-head duel for fourth place. At press time, the 11th Asean Para Games official website shows that Malaysia has a tally of 24-13-5. “This is totally unexpected, but once again, I thank my father Abner for introducing me to swimming so I could overcome my asthma as a young boy,” said Alegarbes, who also won gold and silver medal in the Asian Youth Para Games in Manama, Bahrain last December. Among those contributing silvers to the Philippine campaign were Marcelo Burgos and Angelo Manangdang, who were seeing action in their first international tournament, in the men’s compound doubles in archery, and Andrew Kevin Arandia in the men’s singles event Class 9 of table tennis. Thailand, meanwhile, buried the Philippines in a hail of triples on the way to a 87-36 romp in capturing the men’s wheelchair 5x5 basketball gold at the GOR Sritex Arena. “With still a day left in the games, they’ll be returning home proud for having set a new Philippine standard in the Asean Para Games,” Philippine Olympic Committee president and Cavite Seventh District Rep. Abraham “Bambol” Tolentino said. Sander Severino bagged four gold medals in chess — the most by any of the 144 Filipino athletes sent to Sukakarta — to lead the Philippines’ campaign. Philippine Paralympic Committee president Mike Barredo, who is back in Manila, credited this sterling showing to the late president Fidel V. Ramos, who had urged Barredo to form the para sports group way back in 1996, which was then known as the Philippine Sports Association of Differently-abled Athletes. “It was FVR who initiated the formation of the para movement in the country, so we pay our tribute to the late president by offering the showing of our athletes in the 11th Asean Para Games in Indonesia to him,” he said.