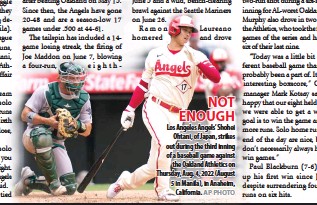 ANAHEIM, California: In a season that has turned into a titanic struggle for the Los Angeles Angels, they suffered another pain-staking defeat Thursday (Friday in Manila). The Halos tied a major league record with seven solo home runs, including two by Shohei Ohtani, but still lost to the Oakland Athletics, 8-7, in a crazy matinee affair at Angel Stadium. The Angels are the first team in the majors to hit seven solo homers and score no other runs in a game. They’re also the sixth team to hit seven homers and lose, according to STATS. “I guess they always say solo home runs don’t beat you, but you feel like if you hit seven, you might. It didn’t work out for us,” Angels interim manager Phil Nevin said. Los Angeles was 24-13 and tied with Houston for the AL West lead after beating Oakland on May 15. Since then, the Angels have gone 20-48 and are a season-low 17 games under .500 at 44-61. The tailspin has included a 14game losing streak, the firing of Joe Maddon on June 7, blowing a four-run, eighthinning lead at Philadelphia on June 5 and a wild, bench-clearing brawl against the Seattle Mariners on June 26. Ramon homered Laureano and drove in four runs, and Seth Brown had a two-run shot during a six-run third inning for AL-worst Oakland. Sean Murphy also drove in two runs for the Athletics, who took the final two games of the series and have won six of their last nine. “Today was a little bit of a different baseball game than I have probably been a part of. It is a very interesting boxscore,” Oakland manager Mark Kotsay said. “I’m happy that our eight held up, and we were able to get a win. The goal is to win the game and score more runs. Solo home runs at the end of the day are nice, but they don’t necessarily always help you win games.” Paul Blackburn (7-6) picked up his first win since June 16 despite surrendering four home runs on six hits.