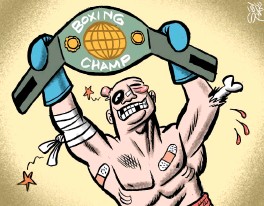 WHAT is it about winning that sets it apart from losing? Winning brings out a lot of perks and benefits: recognition, cash prizes, endorsements, and adulation — and everyone wants a piece of you. Losing, on the other hand, is more expensive (one has to invest more time, effort and money to come back), no perks, no benefits, no one pays you any attention, and you are relegated to the dustbin until you finally win. Both, however, are heavily dependent on one thing — support mechanisms. Whether it be government or private, no support is the equivalent of playing basketball on a dusty ground which muddies up when it rains, running barefoot, pretending that the coconut in your hand is a ball, and winning the game involves physically beating up the opponent. More often than not, the lack of support is directly proportional to losing. But sometimes, luck comes to the rescue. Luck is most possible when total support is present. There are exceptions, but more often than not, this support has to be present to increase the chances of winning. I am also trying to understand why, when a Filipino wins big, everyone claims to know the winner and everyone is proud of the achievement. But there was no support directly extended. Usually, it’s “sariling sikap” that defines the winner. The champion doesn’t even know you and yet, he or she thanks everyone for their support, which I consider very diplomatic and humble. But no one knows how hard the champion worked for it, the proverbial blood, sweat and tears that come with every passionate act. Only a handful would have witnessed the rigors that the champion had to go through before holding the trophy up high. That is why they cry unabashedly when they win. The hard work, the dedication, the passion, the heartbreaks come into play the minute success is attained. It is very difficult to be a champion, but it is more difficult to sustain being a champion. After winning, nature comes raining hard on him/her: Aging, the emergence of better competitors with much more support, etc. therein lies the mental and physical pressure of sustaining the championship. Observe a loser and you will be able to know and read a lot of things about the person instantly — the demeanor, the behavior during the loss, the presence or lack of humility, the totality of the person. The character is all there for the audience to see. When the loser tries again and does a successful comeback, this becomes the sweeter taste of victory, one that again will make another champion shed tears of joy and fulfillment. Since there are a lot of reasons for wanting to be a winner, there should be a lot of support to increase the chances, don’t you agree? But the realities set in, once the goal of winning a competition is undertaken. But the government has to set priorities for the country to survive. Usually, the economy takes precedence over everything. Private companies need to prioritize too, to survive in these very trying times. Who was it who said, “It’s the economy, st-p-d!” So most of the time, it is still the “sariling sikap” that will dominate the definition of winning and being a champion. Only a handful will directly impact on the endeavor. This is where I envy the industrialized countries especially our neighbors in Asia. These countries are economically ahead of ours by more than 50 years and are able to extend such support mechanisms to worthy undertakings. I read somewhere that one government gave substantial subsidies to private groups, which have resulted not only in their global successes but have also contributed substantial revenues (in the billions) to their country. So even government ends up being a champion! Methinks it was a well-studied business program which became a master stroke for both supporter and proponent. Both eventually became beneficiaries, nothing less. I purposely did not qualify the type nor category of undertakings (sports, politics, culture, business, government projects, losing to diseases, and the like) because I wanted to emphasize the generality, the holistic coverage of today’s column. I believe it applies to all undertakings. And so, I salute all the winners, all the champions for their successes, as well as the losers for giving it everything they got. Their immediate source of support, their families, deserve to be congratulated. One trophy fits them all. For those who lost, nothing stops you from trying again, with more lessons tucked under your belt. And if you display humility and man up to your loss, you have my adulation same as the champions. It’s how you come back that defines you as well. There’s always a next time for everything. You all have my prayers for a better and meaningful life.