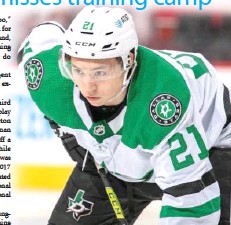 FILIPINO American National Hockey League (NHL) player Jason Robertson missed the start of the Dallas Stars training camp because of a stalled contract negotiation. Robertson’s name is not in the active roster of players for the Dallas training camp at HEB Center in Cedar Park, Texas. Stars general manager Jim Nill, however, said they are negotiating a new contract for the 23-year-old Filipino-American forward. “We’ve had negotiations, ongoing steadily the last couple weeks, but unfortunately (Robertson) won’t be there,” Nill told reporters on Thursday. “Hoping he gets there as soon as possible.” Nill thought Robertson could be disappointed for missing the training camp. “Let’s hope this comes together quickly. I think he’s disappointed he’s not at camp and we are too,” Nill said. “It is very important for a younger player [to be there], and, as you mentioned, new coaching staff and everything else. We do have some time on our side.” He is a restricted free agent after his entry-level contract expired last season. Robertson, who is the third player of Filipino descent to play in the NHL after Tim Stapleton and Minnesota Wild defenseman Matt Dumba, was coming off a 41-goal, 79-point season while playing for the Dallas Stars. He was the 39th overall draft pick in 2017 by the Stars. He had represented the United States in international tournaments by the International Ice Hockey Federation. Meanwhile, Robertson’s younger brother, Nick, is on the training camp roster for the Toronto Maple Leafs. ARIC JOHN SY CUA