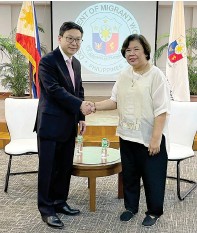 OVERSEAS Filipino workers (OFWs) can expect a rosy job market in the Hong Kong Special Administrative Region (HKSAR) as the city opens up its economy to revive its status as an international financial hub, resulting in increased demand for manpower and talents from across the world. Chris Sun Yuk-Han, Hong Kong Labor and Welfare secretary, in an interview with The Manila Times, disclosed that the HKSAR is home to 190,000 foreign domestic workers, majority of whom or 57 percent are Filipinos. “Right now, we are opening our economy and starting to grow. The number one concern of employers is to recruit more people so business can grow,” he said. Records show that there are more than 300,000 Filipino workers in Hong Kong, majority of them household service workers or domestic helpers. Sun said the number of Filipino domestic workers in Hong Kong is comparable in number to that in the United Kingdom, which has a much larger population at 60 million while Hong Kong has only more than 7 million. He said that they are also opening their labor market to foreign caregivers and health care workers, but pointed out that Filipinos have a considerable advantage because their training is comparable to Hong Kong’s standard in caregiving. Sun said he had seen how future caregivers are trained at the Technical Education and Skills Development Authority that he noted is similar to Hong Kong’s training of its own caregivers. “How they take care of the elderly, the baby, it’s very similar. That’s good enough, using the same standard, training and protocols,” he added. Hong Kong needs at least 7,000 caregivers. Sun gave assurances that Filipinos and other foreign workers are well taken care of by the Hong Kong government, giving them equal protection and the same benefits enjoyed by their local counterparts. He also disclosed that Hong Kong has opened its door to qualified Filipinos and other overseas talents by granting them an initial two-year visa as it gears up for an economic comeback. “I make use of my trip to promote Hong Kong as a destination for talents from the Philippines,” Sun said. “What they need to show is either they earn a high salary or they are degree holders from one of the top 100 universities in the world,” he added. Hong Kong launched a new portal two weeks ago to accept applications from foreign talents who want to apply under its talent drive scheme. Among those needed are technology, art, trading, aviation and maritime workers. “There are a lot of opportunities here. Hong Kong is opening up like the Philippines,” Sun said. “Two weeks after it [portal] was launched, we already received more than 4,400 applications, that’s a lot,” he added. “We believe that in the coming years, there will be a lot of opportunities for talents to explore. Together making use of Hong Kong as an international city, making use of our position as a gateway to mainland China,” Sun said. He added that all the information needed about employment in HKSAR could be found in the talent portal. Qualified applicants will be issued a two-year visa with no condition. “You don’t need to find a job or put up anything. After two years, if you find a job or try to put up a business, we will extend it (visa) by another two years and in the seventh year we will give you a six-year extension,” he said. Sun added that a successful highpaying job in Hong Kong could earn one up to HK$2 million a year. “There’s no place like Hong Kong,” he said.