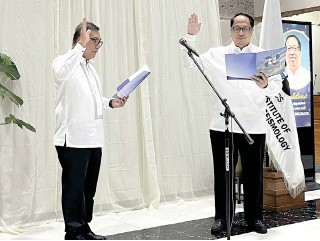 DR. Teresito Bacolcol, who has been named as “permanent” director of the Philippine Institute of Volcanology and Seismology (Phivolcs), vowed to push for the passage of a bill that will modernize the agency. He also wants to forge stronger partnerships with local as well as foreign organizations. Bacolcol said that they already have a proposal, which they will file in Congress for Phivolcs’ modernization. “The effects of the modernization to Phivolcs will depend on the law that will be enacted and its subsequent implementing rules and regulations. But basically, it involves augmenting its present volcano and seismic monitoring networks and requesting for more plantilla positions,” he said. Bacolcol held Phivolcs’ top post as an officer in charge (OIC) following the designation of his predecessor Dr. Renato Solidum Jr. as secretary of the Department of Science and Technology (DoST). He was officially appointed to the post last January 13 by President Ferdinand “Bongbong” Marcos Jr. and had his oath of office before the DoST chief on January 23. In an exclusive interview with The Manila Times, Bacolcol admitted that he was a little apprehensive about leading the agency, but the massive show of support and trust of Phivolcs’ fellow officials and employees pushed him to carry on. Asked about his plans now that he was named as its director in a permanent capacity under the Marcos administration, he said he will push for stronger partnerships with local and foreign organizations. “We can continue to strengthen our partnership through active and responsive collaborations. We will continue to undertake projects that would be mutually beneficial to us and to our partners,” he said. Bacolcol began his career in the agency as a science research specialist from 1997 up to 2005, then as an associate scientist (2005), director 3 (2021) and director 4 as Phivolcs OIC. He graduated from the University of the Philippines Diliman in 1995 with a bachelor’s degree in geology, and earned a DEA (Diplôme d’études Approfondies) in 1999 and his PhD in Geology in 2003 from the Universite de Paris VI (Université Pierre et Marie Curie) in Paris, France. For the local government units, Bacolcol said Phivolcs will help them prepare their disaster preparedness plans and will explain to them natural hazards. “We will maximize the use of the traditional and social media to ensure that the science and technology in Phivolcs is wellcommunicated to the people,” the official said. As to its foreign partners, Bacolcol said his agency will continue exchanging technical knowledge through training, conferences and other joint efforts in advancing mutual capabilities. He added that the Philippines has existing collaborations with various organizations from Japan, the United States and Taiwan in volcanology and seismology.