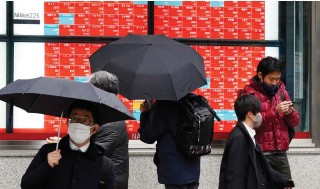 HONG KONG: Tokyo led gains across most Asian markets again on Tuesday, in another day thinned by the Lunar New Year break, with sentiment boosted once more by a surge on Wall Street. Tech firms provided the support in New York as traders gear up for the release of earnings from big-ticket firms, including Microsoft and Intel. Hopes that the Federal Reserve (Fed) would slow down its pace of interest rate hikes have also given investors optimism that the United States economy could avoid a recession, or at least suffer only a mild contraction. The gains come after markets suffered a wobble last week on worries about a downturn caused by a series of interest rate hikes last year aimed at bringing inflation down from multiyear highs. “With little new news to guide sentiment, the overnight move [on Wall Street] could be a product of investors getting comfortable with the current macro backdrop while cleaning the slate of last week’s trepidation or simply positioning ahead on next week’s [Fed policy decision],” SPI Asset Manage ment’s Stephen Innes said. Inflation coming down suggests that the days of large 75-basispoint hikes are over, with “most officials across the hawk-and-dove spectrum signaling a preference for a slower rate hike pace,” he added. After Wall Street’s rally, Asia picked up the baton on Tuesday, though most markets were shut for the holiday. Tokyo added more than 1 percent for the second day in a row while Sydney, Manila, Mumbai and Bangkok were also well up. Jakarta and Wellington dipped, however. But while the year started on a positive note, BlackRock Investment Institute strategists raised a warning. “Markets have leapt ahead this year, driven by China’s reopening, falling energy prices and slowing inflation,” they wrote. “This has spurred hopes of a soft economic landing, plummeting inflation and interest rate cuts. We see markets vulnerable to negative surprises — and unprepared for [a] recession,” they added. Oil prices barely moved after jumping last week to their highest point since November, on demand hopes fueled by China’s reopening. “Crude prices are wavering as the dollar stabilizes and overexhaustion from China reopening headlines,” Oanda’s Edward Moya said. “The economy still could roll over, and some energy traders are still skeptical on how quickly China’s crude demand will bounce back this quarter.” “This week will learn a lot about the crude demand outlook after we hear earnings from the airlines and Chevron,” he added. “Oil should be stuck in wait-andsee mode until we learn more about the health and outlook of the US economy.”