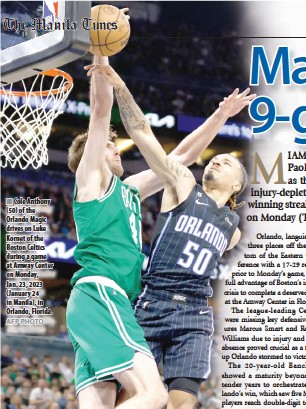 MIAMI: Number one draft pick Paolo Banchero scored 23 points as the Orlando Magic ended the injury-depleted Boston Celtics’ nine-game winning streak with an upset 113-98 victory on Monday (Tuesday in Manila). Orlando, languishing three places off the bottom of the Eastern Conference with a 17-29 record prior to Monday’s game, took full advantage of Boston’s injury crisis to complete a deserved win at the Amway Center in Florida. The league-leading Celtics were missing key defensive figures Marcus Smart and Robert Williams due to injury and their absence proved crucial as a firedup Orlando stormed to victory. The 20-year-old Banchero showed a maturity beyond his tender years to orchestrate Orlando’s win, which saw five Magic players reach double-digit totals, with Wendell Carter Jr. posting 21 points and Germany’s Franz Wagner 15. “Anytime you get to play a championship-level team, a team that’s been to the finals, and has been where you want to be, you want to put out your best effort and get the win,” Banchero said afterwards. “That’s my mentality, and that’s our team’s mentality, and we were able to do that. “I just wanted to be decisive with my moves, when I decided to attack, when I decided to shoot — not force anything and let the game come to me. Be aggressive and decisive, and live with the results.” Arguably the most impressive contribution came in the form of a 10-minute cameo from Jonathan Isaac, making his first appearance in an NBA game since August 2020 following more than two years dominated by injuries. Isaac finished with 10 points, three rebounds and two steals during his encouraging return to the hardwood. “It felt fantastic, just to touch the floor — I feel so grateful,” Isaac said afterwards. “I feel good, I’m grateful to be with the Magic, plus to get a win — I couldn’t be happier.” Jayson Tatum and Jaylen Brown led Boston scoring with 26 points each, while Derrick White added 11 and Sam Hauser 13 off the bench. In other games on Monday, Giannis Antetokounmpo and Khris Middleton returned from injury with a vengeance as the Milwaukee Bucks arrested their current slump in form with a ruthless 150-130 pounding of the Detroit Pistons. Antetokounmpo had missed the last five Bucks games with a lingering knee injury, a spell that saw Milwaukee lose three games. Middleton meanwhile had not played since midDecember. But Antetokounmpo showed no sign of ring-rust as he led a comprehensive rout, scoring 29 points with 12 rebounds and four assists. Brook Lopez added 21 points while Middleton added eight points on his return. The game was effectively over after the first quarter, with Milwaukee pouring in an astonishing 49 points in the opening period to take a 25-point lead into the second quarter. Milwaukee improved to 30-17 in the Eastern Conference standings, in third place behind Boston and Philadelphia. Detroit remained rooted to the bottom of the table on 12-37.